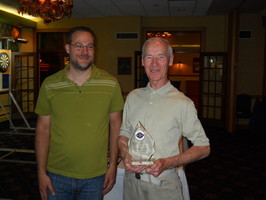 Remembering the start of the BADL (1979). We had played darts in Fort Erie under the name of the Buffalo Soccer Club for some years. When we decided that we would like to form our own league here in Buffalo. So in late 1978 we got together at Ray's Antique Tavern on Bailey Ave. Chuck Stuart (Treasurer), Bob Hawkes (President), Eric Raine (Vice President), Kevin Bickerstaff (), Alan Hawkes (Secretary). Bill Dunphy was in attendance and later took over the Vice President position. It was at this meeting that a plan was set in motion for the BADL to start in September 1979. It was quite an undertaking, as there were very few bars that even had a , but we got the word out. The bar owners thought it would be good for .
The first seven teams to were, The Buffalo Soccer Club (Genesee St), Gables (Hertel Ave), Charlie R's (Grand Island), Thomas & Hugies (Ontario St), Shannon Pub ( the old Airways Hotel on Genesee St in front of the Airport), Two teams i can't remember, then three weeks into the season Checkers (Hertel Ave) joined. Making eight teams for the first season. Then the second year we had 16 teams, after that we kept growing. At the peak we had 96 teams, Premier, A, B, C, D 16 teams in each with a roster of 8 players per team.
With all that in place all we had to do was wait for September. It was exciting to think we were going to have our very own league at last, those were nervous days. Unfortunately my good friend Eric Raine never saw the of our venture, as he passed away on May 17th 1979. I will always remember how excited he was, and how he was looking forward to the start of the first season. Eric Raine was 46 years of age.
I played in the league for 15-16 years until 1995, and on and off for a couple more. It was a great time in my life which i will always treasure . I taught my two sons Paul and Owen , and they became very good darters . I also taught quite a few others through the years. Which gave me great pleasure to see them develop their skills, all in all it was a time when i met many friends, some lifelong, and i can truly say i had the time of my life.
Fond Memory's:
Runner up to Cliff Wilson 1980-81, a Canadian ranked player, league tournament Fort Erie.
Beating the top team in the league at the time, knocking them out of the playoffs, Lancasheer Las in Fort Erie ( they were in our BADL premier division ) This team from Fort Erie had many ranked players, stacked is the word, on their team. We beat them with the youngest team in the Premier.
Trophy's won:
Fort Erie B-Flight  Champs 1975-76 ( Soccer Club)
Fort Erie B- Flight Champs 1976-77 (Soccer club )
Singles runner up 1980-81 League singles tournament (Fort Erie)
BADL- Mulligans Challenge Cup All Star champion 1981
BADL -South Division Champs 1980-81 (Soccer Club)
BADL-North Division Champs 1981-82  ( Soccer Club)
Fort Erie C-Flight Champs 1981-82       ( Soccer Club )
BADL Most Finishes 1982-83 ( Broadway Joes )
BADL High In 145    1982-83 (Broadway Joes)
BADL North Division Champs 1982-83 ( Broadway Joes)
Fort Erie B-Flight Champs 1983-84 (Soccer Club)
Blind Draw Doubles Tournament Nov 17th 1984 ( The Airways Hotel )
BADL B- Division Champs 1984-85 ( Max's Bar Kensington Ave )
Fort Erie B-Flight Champs 1984-85 ( Soccer Club )
BADL Playoff Champs 1986 (Leisure Tyme )
BADL Regular Season Champ 2008-09
Last 180 2008-09
Multiple 180's, high ins, high outs, through out the years
Teams I played for: